My name is Dicki Fliszar, I have been a professional musician for over 20 years, have been signed to five major record labels and major publishing companies, have toured the world with Bruce Dickinson (Iron Maiden) and had the number 1 rock album in the UK with my band SKIN.

On the other side of the music spectrum, I have toured and recorded with Singer/Songwriters, such as Anna Nalick and Matt Nathanson and also have recorded many albums, several of which with Grammy award-winning and multi-platinum selling producers, such as Keith Olsen, John Shanks etc. I have a Degree in Music from the Open University, United Kingdom. Over the last 11+ years, while maintaining an active career in music, I have taught children and adults in private settings, various music schools, and in the Los Angeles Unified School District.

Here is a photo taken of me playing the drums on tour with SKIN in Europe performing to an exhilarating crowd of over 60,000 people. 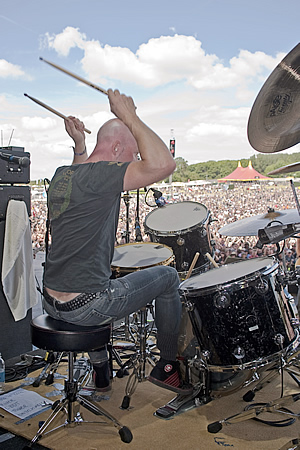